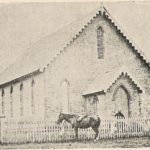 The first Presbyterian services were held in Maryborough in 1863, following a meeting held on 16th February 1863 at the court house.  Maryborough had less than 2000 residents at that time.   The sermons were preached from the Magistrate’s desk in the old Court House which is now the site of the picturesque Town Hall Green.

Revd. Dr. Joseph Knipe who arrived in Maryborough in 1867 was a driving force behind the construction of St. Stephen’s Presbyterian Church.   Revd Dr. Knipe who came from Ireland served as a minister in Maryborough for 40 years.

The foundation stone for the new Presbyterian church was laid on 8th October 1880 and the church was opened on 20th November 1881 and is now known as St. Stephen’s Uniting Church where the Maryborough Congregation regularly meets.  The church was built at an approximate cost of £4400 and is a conspicuous landmark in Maryborough with its striking belfry and tall spire.

The style of architecture is Gothic, though not strictly so in some of the minor details; the openings and main points of the design, are however in accordance with the true Gothic school, and at once strike the eye.   The front elevation shows a porch at each corner, approached by a flight of stone steps; the porch on the left is under the tower, which is 120 feet high, set off with Louvre ventilators, and topped with an elegant finial, which also serves to carry the indispensable lightning conductor.  The main building is 84 feet long, with an internal breadth of 40 feet.  A most attractive feature of the interior is the gradual fall in the floor, two feet in the whole length, the object of which is to afford every occupant of the church a full view of the pulpit.   A height of 45 feet from the basement to the apex of the roof gives the church a loftiness which ensures perfection in acoustics and an airiness in appearance which sets off the artistic arrangement of timer and decoration under the roof.

In October 1889 it was decided to purchase and install a pipe organ in St. Stephen’s Presbyterian Church using funds from a bequest from Janet Melville. This organ was ordered and manufactured the following year and on Sunday 12th April 1891 the Melville Memorial Organ was played for the first time

The stained-glass windows depicting various biblical scenes are gifts from various families that have been associated with the church over the years.   In 1938 the James Fairlie Memorial window was unveiled.   This window represents the figure of Christ with the disciples gathered around him at the Last Supper.  His right hand is pointing upwards to the Celestial City, richly represented in the top part of the window.  Across the bottom of the window are the words of Jesus which have been a comfort to many believers.   “In my Father’s house are many mansions.”

Very little in the church building has changed since the time that the church was built, however, in 1995 the choir stalls were removed, and the open sanctuary was built.